In the Qur’an, the Islamic tradition in general, and our everyday experience, beauty (whether iĥsān or jamāl) is always connected to love, and love to beauty. “God is beautiful, and He loves beauty” the hadith says, and the Qur’an repeatedly says, “God loves the beautiful-doers(muĥsinīn)” (2:195, 3:134, 3:148, 5:13, 5:93). Islamic thinkers, as different as al-Ghazālī and Ibn Sīnā, even defined love as an inclination or attachment to what is pleasing, perfect, and/or beautiful.10 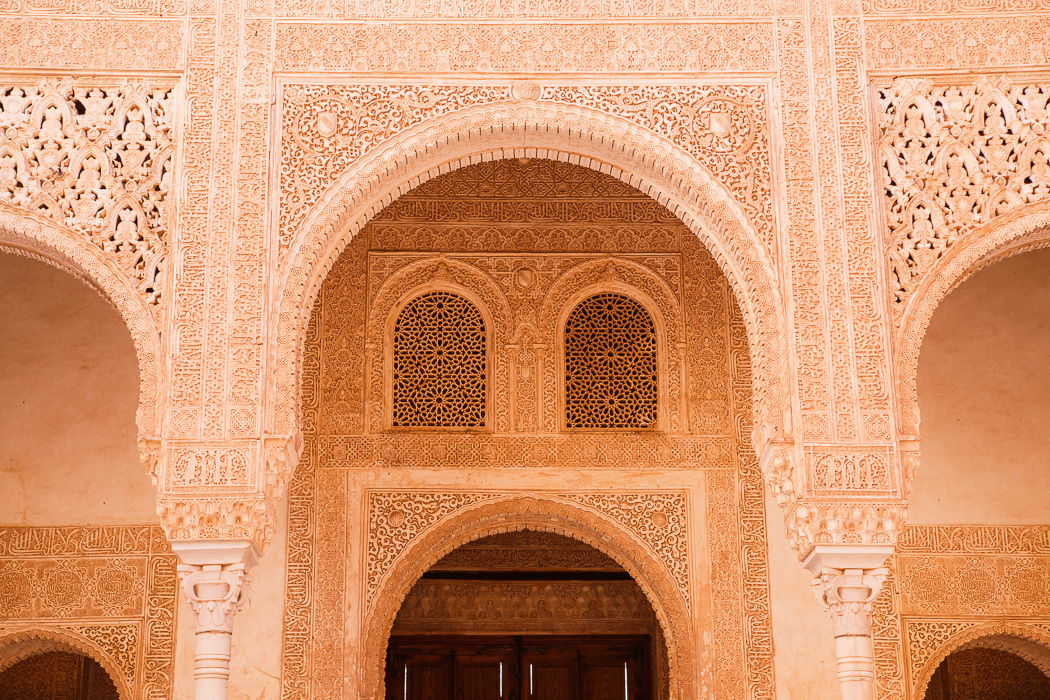 Detail from the Alhambra Palace in Granada, Spain

As such, the beauty of Islamic art attracts love, both human and divine. Whether praying in or even just strolling through the beautiful mosques of Istanbul or Isfahan, one cannot help but feel love and beloved, regardless of the circumstances outside. This gentle presence of beauty and love causes the sakīnah—the deep peace engendered by the awareness of the presence of God—that is one of the most characteristic features of the architecture of all traditional mosques. The harmony of their geometry makes the barakah (sacred presence) of the space tangible, helping to bring our souls into balance.

Turning to the literary arts, the Islamic civilization’s obsession with love can be found in verses of love poetry scattered in Islamic treatises of logic, law, geometry, theology, and philosophy. Until recently, the culture of love permeated nearly all of the traditional Islamic literary genres and understandings of reality. For scientist-philosophers, such as Ibn Sīnā, love was quite literally the force that moved everything in the cosmos, from rocks to angels.

Moreover, love is essential to the cultivation of iĥsān and the closely related concept of ikhlāś (sincerity). As a hadith says, “None of you truly believes until God and His Messenger are more beloved to him than anything else.” Without this selfless love, our pious actions and worship are motivated either by pretentious arrogance (riyā’), which the Prophet ﷺ called the lesser or hidden shirk (idolatry, setting up a partner alongside God), or by a selfish desire for rewards or to escape from punishment in this life or the next, instead of by loving God for His own sake and loving others for His sake, as well.11 Either way, this limits our love and enslaves us to our own selves and desires: “Have you seen him who has taken his desire to be his god? God has led him astray” (45:23), “but those who believe are more intense in love for God” (2:165). To paraphrase a verse by the poet Hafez, “apart from lovers, all I see is self-righteous hypocrisy.” The Qur’an directs the Prophet ﷺ to give love as the reason and reward for following him: “Say: if you love God, then follow me and God will love you” (3:31).

Love is the truest and most sincere motivation for any action; it is what moves our souls in one direction instead of another. Love always attaches itself to beauty of one kind or another. When mosques and places of learning are beautiful, we are drawn to them. When speech is beautiful, we are drawn to it. Beauty inspires love, and love moves our souls. This is true for supra-sensible divine beauty, which the Islamic arts try to make sensible, but unfortunately it is also true for the gaudy, shallow “beauty” of shopping malls, skyscrapers, and the “adornments of this world” (zīnat al-ĥayāh al-dunyā, Qur’an 18:46), which are really a parody or a shadow of true beauty. This begs the question of the difference between the liberating beauty of Islamic art and the distracting, hypnotizing “beauty” of the dunyā. How can one discern between the two, and why is it important to do so?

In order to distinguish Islamic art from other forms of art, we must define and demarcate Islamic art. Although Western art historians were slow to recognize the unity of the Islamic arts in cultural regions as different as West Africa and Central Asia, scholars such as Seyyed Hossein Nasr and Titus Burckhardt have compellingly made the case for a universal Islamic approach to the arts that manifests itself in different variations in different local contexts. In doing so, these scholars have helpfully distinguished Islamic art from Muslim religious art and from art made by Muslims. The form and content of traditional Islamic art springs directly from the Qur’anic revelation and diffuses the perfume of the Muhammadan blessing (barakah Muĥammadiyyah).12 The Islamic arts incorporated the techniques and methods of Roman, West African, Byzantine, Sassanid, Central Asian, and Chinese artists to give birth to a new art depicting the new religion’s vision of reality. The true source of Islamic art is the Islamic revelation, not its historical precedents or influences. This singular origin accounts for its remarkable unity across time and space.

Art made by Muslims or even art made in Muslim societies is not necessarily Islamic art. The late Iraqi-British architect Zaha Hadid designed many famous buildings, but none are examples of Islamic architecture. Conversely, students of all faiths at the Prince’s School of Traditional Arts in London produce works of traditional Islamic calligraphy, illumination, and geometric design. It is the form of the art, shaped by revelation and not the identity of the artist, that makes a work distinctively Islamic.

“Posters of Mecca and Medina or mass-produced prayer carpets emblazoned with the Kaaba are religious art but not Islamic art, despite the sacred architecture of the sites they depict.”

Religious art, meanwhile, includes items of religious significance or those used for religious purposes. Not all religious art is Islamic art, while much of Islamic art is religious art—even if not obviously so. Syrian wood inlay cabinets and tables may be used to hold alcohol, but their geometric patterns portray some of the loftiest realities of Islamic metaphysics and cosmology. Posters of Mecca and Medina or mass-produced prayer carpets emblazoned with the Kaaba are religious art but not Islamic art, despite the sacred architecture of the sites they depict. The recitation of the Qur’an in traditional maqāms and even the singing of inspired poetry in these modes and rhythms are both Islamic and religious art, whereas “Islamic” parodies of Justin Bieber songs and the popular auto-tuned, acapella qaśīdahs in four-part harmony may be religious, but Islamic or sacred they certainly are not.

While difficult to define in concrete, formal terms, Islamic art is recognized easily, especially by those familiar with other dimensions of the Islamic tradition. Whether visual or sonoral, the Islamic arts project unity (tawĥīd), which manifests as symmetry, harmony, and rhythm—the imprint of unity on multiplicity. The Islamic arts do not mimic or imitate the outward forms of things but present their inner, archetypal realities, hence the emphasis on number (geometry) and letters (calligraphy), which are the basic building blocks of space/time and language. In traditional calligraphy, geometric ratios govern even the shapes and sizes of the letters, which gives the lettering art its remarkable harmony.

The Islamic arts also all bear the imprint of the Qur’an in terms of its meanings (ma¢ānī) and structures (mabānī). Like many sacred texts, many of the surahs and verses of the Qur’an have a chiastic, or ring, structure. That is, the final section mirrors the first, the penultimate section mirrors the second, and so on, until the center, which contains the main theme or message. This symmetric, polycentric structure of overlapping patterns is clearly reflected in the geometric patterns of illumination that adorn Qur’anic manuscripts; the tessellations that adorn the mosques, madrasas, and homes where its verses are chanted; and even the structure of the musical maqāms in which it is recited.

Islamic art is founded on the interconnected sacred sciences of mathematics, geometry, music, and cosmology, not so different from the medieval Christian notion of ars since scientia nihil est (art without science is nothing). All of these sciences connect the multiplicity of creation to the unity of the Creator and engage the qualitative, symbolic aspects of multiplicity as well as its quantitative dimensions. Aristotle divided philosophy into three parts: physics, mathematics, and theology (ilāhiyyāt). Physics addresses the natural or material world, and theology the divine, while mathematics (and the associated sciences of geometry and music, which are numbers in space and time, in the visual and sonoral domains, respectively) deals with the intermediate, archetypal, imaginal realm—the barzakh, between the divine and the terrestrial. These sciences of the intermediate realm allow the Islamic arts to serve as a ladder from the terrestrial to the celestial, from the sensory to the spiritual. They also have their foundation in Islamic metaphysics and spirituality, which give the artists direct access to the spiritual realities and truths represented in their art.

Plato describes beauty as the splendor of the true; the inability to discern between beauty and ugliness, therefore, corresponds to and accompanies the inability to discern between the true and the false (al-bāţil). Harmonious and geometric, true beauty is timeless and reflects the beauty of the unseen, leading to tranquility and the remembrance of God. False beauty, like ugliness, is fleeting, discordant, and unbalanced, reflecting the chaos and multiplicity of the lower world and the lower levels of the human psyche, which leads to imbalance, dispersion, and heedlessness (ghaflah). It brings out the opaque aspect of creation that hides or veils the divine, whereas true beauty brings out the transparent or reflective aspect of things that makes them legible as signs of God.