Tatreez is an indigenous embroidery practice and cultural art form that illustrates Palestinian land and life: the tradition of reading the bottom of the coffee cup embodied as a brown octagon, a diagonal culmination of lines depicting wheat, or an endless squiggle impersonating a row of snails. History tells us that couching is popular in Bethlehem because of the influence of the Byzantine Empire there. The predominance of amulets or triangle crescents among bedouin women is because they believed it repelled the evil eye; birds are showcased in Gaza and Haifa as they were especially visible in coastal towns during migration seasons. The variations and significations of motifs are specific according to the women who embroidered them, but they are also adaptive as they were worked on collectively.

Following the Nakba of 1948, tatreez transformed into an act of resistance against Zionist claims of Palestinian non-existence. As Palestinians were forcibly displaced, women wore their thobes (their embroidered dresses) or carried them on their backs. The thobes, with their different motifs, laid claim to the villages the women were expelled from and where they vowed to return. Discussions of tatreez’s significance in Palestinian history often go back to ancient history, but what makes tatreez significant today is how it has been practised and preserved since the Nakba.

Once established, the state of Israel co-opted Palestinian culture (including tatreez) to perform history and indigeneity. In 1954, Ruth Dayan, the wife of the Israeli military leader Moshe Dayan, founded Maskit Crafts as a fashion house to support Zionist goals of establishing a national culture. In 1966 Miss Israel wore a Bir Saba’ dress to the Miss Universe pageant (and won ‘best native costume’). In the 1970s, the Israeli airline company El Al assumed the embroidered Palestinian dress as their uniform. Israeli designers continue to utilise the kufiyyeh headscarf and tatreez in an effort to appropriate them. In the 1960s Samiha Khalil opened up her garage in Al Bireh to embroiderers, establishing the Inash Al Usra Society. Similarly, the Palestinian Liberation Organisation (PLO) established SAMED (following from the concept sumud, meaning steadfastness), a cultural arm of the resistance which organised a workforce for cultural production. During the First Intifada from 1987–1993, as Palestinian flags were being confiscated by Israeli authorities, thobes were adorned with flags and other nationalistic symbols. A labour-intensive undertaking itself, tatreez thus gained value as a metaphor of steadfastness.

In her book Threads of Identity, Widad Kawar, the custodian of the largest collection of Palestinian thobes, shares the story of Halimeh, a woman from the village of Beit Jibrin who had become a Palestinian refugee in Jordan after the 1967 war. Halimeh knocked on Kawar’s door and sold her dress to her on one condition: that it would be preserved. It was becoming customary for thobes to be cut up and reused decoratively and Halimeh had wanted her thobe to stay intact as one whole piece of Palestinian history, a piece of herself. Kawar relates how she took Halimeh’s terms so seriously that at a dinner party she was unable to swallow food because the host’s chairs were upholstered with cut-up thobes. Kawar continues to criticise the practice of cutting up vintage thobes to be sewn into another commodity, and to collect the textiles that represent women’s lives. 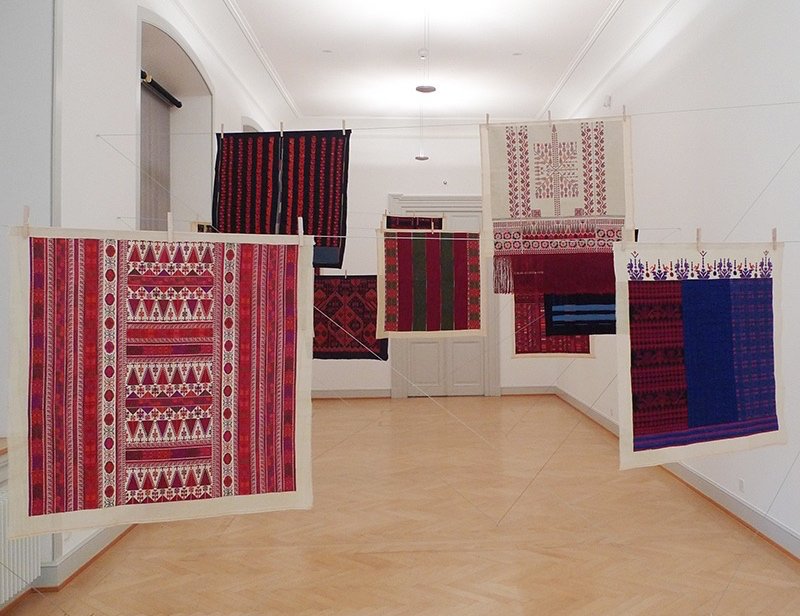 Tatreez became incorporated in the art produced as part of the Palestinian Liberation movement. In painting, Tamam Al Akhal (b 1935) and Ismail Shammout (1930–2006) popularised scenes of Palestinian women wearing a thobe, the tatreez detailed into the thobe enhancing the reference to the motherland. The labour and care of illustrating tatreez can also be seen in the work of Abdel Rahman Al Muzayen (b 1943), an artist who has centred embroidery motifs in political posters, consulting his mother, an embroiderer, about the relevance of symbols in commemorating labour resistance or international solidarity. Although primarily a painter and sculptor, Jumana El Husseini (1932–2018) exhibited her large-scale embroidery works as part of her practice, a craft she practised as a Palestinian woman and which influenced her production as an artist.

This article is from http://thirdtext.org/farah-tatreez1